Here’s the update summary from Puddy:

In the wake of their addition last month, submarines have undergone a number of changes with this update. First and foremost, storage has been added to each sub. Accessible from the driver’s seat (potentially with a little alt-looking), 12 items can now be stored in each sub. You can’t lock this storage, so be careful where you leave your sub lying around.

Subs have also been nerfed in a couple of ways. Primarily, bullets now do much more damage. Instead of it taking 5 or 6 mags to destroy, subs will now lose all health within about 2 mags of the AK, making them much more susceptible to gun fire.

Runaway subs will hopefully be less of a thing this month as submarines now stop moving faster if the driver dismounts. Traveling in a sub will also now count towards players’ global boating stats – so that’s nice. Finally, in the realm of sonar, only submarines with their engine on will show up as a blip on other people’s sonar.

No longer can you spend the whole day submerged in your trusty sub. Oxygen levels have been added to the game — primarily impacting submarines. As you descend into the depths of Rust’s waters after the update, you’ll notice a new UI element on the bottom right of your screen. This counter (which starts at 10 minutes) lets you know just how much time you have left.

As long as you’re underwater, this timer will continue to count down. Upon resurfacing with the sub, the oxygen will gradually refill till you eventually have another 10 minutes. Want a little extra time underwater? Bring a full diving tank and your player will start pulling oxygen from that once the sub is out (giving you up to an extra 10 minutes).

Run out of oxygen, however, and you’ll suffocate pretty quickly. This dynamic is true not only for submarines but other underwater activities which require oxygen (i.e. diving). 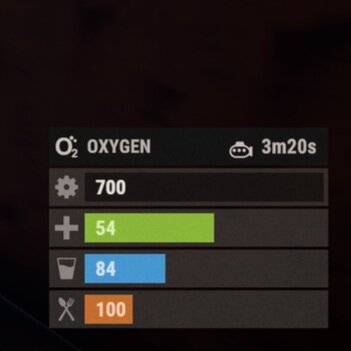 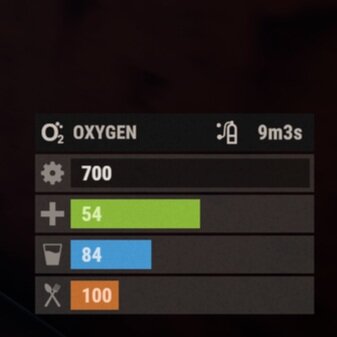 Player’s ability to attack in subs has also shifted this update with some significant changes to torpedoes. Most notable, the rising torpedo has been completely removed from the game — it’s now a direct torpedo or nothing. The direct torpedo won’t be quite as accurate when firing on the surface as some inaccuracy has now been baked in. Finally, torpedoes won’t fuck up boats quite as much as the explosion forces have been reduced by 75%.

Crawling around in the wounded state will be a bit more precarious after this update. With a significant nerf, the health of crawling players has been reduced by 75%, making them much more susceptible to immobility and death.

The hottest new places to hang out underwater have received some changes this month. First, the amount of underwater labs on each map has been cut in half (about 3 should now spawn on a normal map size). With that in mind, the size of each lab should be larger overall (so long, small labs).

Also, puzzles will be a bit harder to solve as the blue and red keycard spawns have been removed from each lab. That means you’ll now need to bring your own card if you fancy that high quality loot. Keep an extra eye out while you’re going for said loot as NPC’s now spawn specifically by the puzzle rooms.

On approach, you’ll notice a new moon pool is also in the mix. Acting as a secondary to the large pool, this ‘dive-only’ pool is much smaller and will not accept sub-based visitors.

A new round of Twitch drops is due out this month. Along with the expected fresh skins from content creators, a new dynamic takes effect for the first time which should help more people get the skins they want.

Towards the end of its normal 1 week duration, this campaign will open up all items to the general drop category during the last 24 hours. That means it shouldn’t matter what Rust stream you’re watching, you’ll be able to get any skins you missed out on earlier in the week.

As always, head to the Facepunch Twitch page to link your accounts and get ready for those drops! For more info on this Twitch drop campaign, check out the great write up on /r/playrust.

Edit: You can also see the full list of skins here.

Winner of the map making contest from Facepunch the other month, Gravis Island is officially available for purchase and use by all server owners. We didn’t hesitate to pick up a copy so we can host this exciting new 3.5k custom map on our Zenlabs servers.

This map goes live after the update and forced wipe.

Some time limitations to underwater travel are on the horizon as the team is implementing oxygen to the new submarines. Added to staging this week, there is now an oxygen tank for each sub which provides the occupants with a certain amount of air per dive (around 10 minutes). If you stay underwater too long, you’ll lose all oxygen reserves and need to surface to refill — or die.

As you might imagine, this oxygen stuff carries over to when you’re underwater in any circumstance (not just in subs). This functionality, although on staging now, is still a work in progress. We’ll have more information with the update post next week.

Along with the oxygen changes, storage has been added to each sub. Accessible while sitting in either sub, storage of 12 items has been added to both the solo and duo submarines. To compliment the new storage, interior lighting has been boosted in the subs to allow people to actually see while looking around.

In the realm of small yet significant changes, wounded crawling has received a sizable nerf this week. Health of a crawling wounded player has been reduced by 75%. Making them much more susceptible to death and immobility, crawling players will have a harder time surviving once this change goes live with the update next week.

Changes to the map are taking place on the ‘save216’ branch. As we normally see prior to an update, the ‘save’ branch is where the team focuses their changes to procedural map generation.

Most changes this month appear to be related to the underwater labs. Specifically, there will now be about half as many on the map (a goal of 3 for a default size seed) but they will generally be larger overall. Blue and red keycard spawns have been removed, making puzzle access a bit trickier than before. There’s also a new secondary dive-only moonpool being added. Finally, the lab dweller NPC’s will now always spawn around puzzle rooms.

Expect these changes to go live with the forced map wipe and update next week.

Work continues on the newest monument due to hit Rust in the near(ish) future. To be located in the desert, this military base will likely feature all the normal monument activities (NPC’s, loot, rads, etc.) while also including a new MLRS (or multiple rocket launch system).

Still on a separate branch, we’ve yet to receive any visuals or solid details on this new monument. That said, work continued this week on various models, textures, and prefabs related to this military-themed monument.

Given we’re one week from the big update, it seems unlikely this monument will be ready for prime time next week.